James Lavelle unveils some of his secrets… If you were into Mo’ Wax in the mid/late 90s and had an internet connection, you’ve probably read this funny article already. If you have not, go on!
This was originally posted in september 1994 on a site called State 51 and is long unavailable. All images are from the initial page.

A Case Study of the Young Entrepreneur

James Lavelle and the MoWax Empire 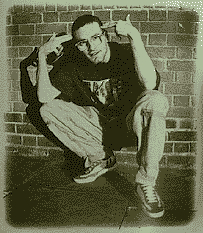 James “the holygoof” Lavelle is the mastermind behind the Mo’ Wax music empire. He left school at 16, dropped out of business college and now at 19 years of age he owns Mo’ Wax records. He also runs a production company (whatever that is), co owns Mo’ Wax merchandising and DJs all over the world (and Oxford) for ludicrous sums of money. He’s a man of immense wit, intelligence and sexual prowess and is often likened to the great actor, John Holmes R.I.P.

By the time you read this the fifteenth release on Mo’ Wax should be in the shops. The back catalogue includes releases by Palm Skins Productions, Marden Hills, Repercussions, Raw Stylus and DJ Shadow amongst many others. He has great ideas for the future of the label; expanding its hip hop fused experimental jazz, bringing together DJs from all over the world, and even mad rock fused concept LPs. He wants to expand his merchandising to include limited edition accessories. Already he has a completely redesigned record bag, and t-shirts with Talkin’ Loud man Swifty’s graphics. Not content with this he also wants to produce totally collectable items such as plastic candy novelties like bubble bleepers, and Star Trek Tribbles. We just had to acquire some of his great knowledge and wisdom and were willing to pay large sums of cash for lessons.

We met up with the man at his penthouse suite in Ladbroke Grove, an area renowned for its many young entrepreneurs in the flourishing local pharmaceutical and bicycle recycling industries. Seated in luxurious surroundings, we asked him how we too could own a crystal chandelier, a shagpile carpet, gold Technics turntables and have our own personal, uniformed blunt builder.

“You’ve got to have a good idea. Everybody out there can do things, but if everybody out there had the same ideas, everybody would be doing the same thing and it would be a clone society. I had an original idea which I built up. I was obsessive about it. I’ve always been an obsessive person. The thing I wanted, I had to have. I was lucky, I got what I wanted.”

James ran a club night in his hometown of Oxford. These Mo’ Wax evenings really got things moving for him.

“That was my real breakthrough. We were doing stuff with Galliano, Giles Peterson and that whole acid jazz thing. I hooked up with all sorts of people. That’s how it started. I got the support of people. What I was doing was young, fresh, left field; it was doing things that other people weren’t and it had the right people involved. They saw the need for a young element in the jazz scene. I got props from people like Giles Peterson and the magazine Straight No Chaser. To them it didn’t matter who you were, it was what you had to say and what you had to offer.”

But as well as support he also had grief from some. People hassled him for leaving school without A levels and leaving college to work in a record shop and concentrate on DJing. Other people thought he was too young to do the things he wanted.

“Some people talked M&Ms (bullshit). People didn’t take me seriously. But I had an attitude where I didn’t give a phuck what other people thought. Not an anti-establishment thing, not a thing where you’re really rude – but where I didn’t rely on other people, because you never can.”

So with an idea, some attitude and a bit of support from the right people, the Mo’ Wax empire was born. It’s totally different to anything else around. It draws from different areas of music and also the lifestyles that go with them. It really is a practical extension of James’s ideas all based around a loose hip hop style. James refuses to be part of any one scene, instead taking the elements he likes and creating something unique. He genuinely likes all the stuff he produces.

“I’m into a whole concept, it’s a whole scene. I’m totally involved in it. We cover hip hop fused music. We want to do this rock hip hop thing. We are gonna launch a mad hip hop/thrash fused band, a young Beastie Boys kind of thing. I’m into the total energy of the Beasties and that whole kind of skate thing. I want that energy and total madness surrounding the whole idea.”

Things like this might sound ambitious, but then so does owning your own successful record label at 19 or being flown to places such as New York, Los Angeles, Tokyo and all over Europe to play out in clubs.

“You’ve got to have a go. Its like picking up a skateboard for the first time in your life. If you don’t have a go you’ll never know what it’s like.”

He is actually doing the things he wanted to and it is he who is making it happen. He just got up and met people and set out to do these things, borrowing small sums of money to get ideas off the ground.

Words to the Wise

In the end James had no lessons for us. But after we passed him another fist of cash he did give us these pearls of wisdom.
“Have a good idea, it helps!”
“The shit’s got to be original, something that people want but haven’t got.”
“You’ve got to deliver a package, not just music but a whole lifestyle.”
“Be totally open minded. Look around and use what you need.”
So armed with this fresh philosophy of private enterprise, you too can now work towards a French maid to do your cleaning, a mirrored ceiling in your bedroom, and a condom dispenser in every room of your luxury flat.

Job:
Young Entrepreneur
Qualifications:
Need to have good ideas, an open mind and a slightly obsessive attitude. A good way with words and a likeable personality are also essential. A big penis is optional.
Suggested Route to Career:
Leave school with just enough qualifications. Drop out of further education to pursue your interests. Meet as many people as possible and try to borrow cash from them to get good ideas rolling. It’s always a shrewd move to try and pay them back again as well.

Words by Russell Waterman (slamcity@cix.compulink.co.uk); picture by William Bankhead. This version: September 94. If you wish to re-use, please contact phat@c21pub.demon.co.uk.

One thought on “James Lavelle interview : Career Guide to Losers”