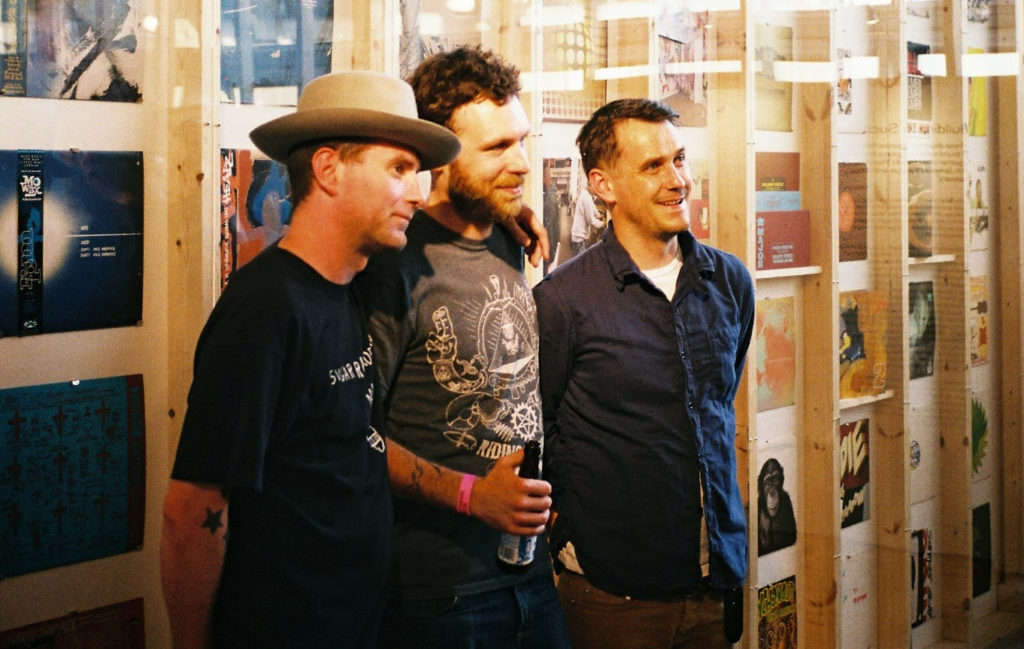 Photo : James Lavelle, me and Ben Drury at the Mo’ Wax Urban Archaeology exhibition. Shot by my mate Alex.

here we are : today it’s exactly 2 years since your Mo’ Wax Urban Archaeology Kickstarter campaign has been funded, and I’d like to talk about it if you don’t mind. Sorry in advance for my average English, but I guess you know what I’m about to tell you anyway.

Obviously I’ve been part of this campaign. I consider myself as one of the most hardcore Mo’ Wax fans, so I was extremely excited, not to say that I went crazy, when I found out that something involving Mo’ Wax was about to happen.

The problem is that you almost fucked it all up. Let’s see why.

I’ve personally backed the project by choosing the “guided tour” of the exhibition. Indeed, it was the right thing for me : an opportunity to meet one of my heroes and being told some good stories, surrounded by all the lovely stuff I’ve been trying to get my hands on for the last 20 years.

So, I’ll be honest, that night was one of the best memories of my life, and I’ll never forget it. It was absolutely awesome to meet for the first time and chat a bit with you, Ben Drury, Andrea Parker, Trevor Jackson, Paul Bradshaw… as well as to meet the UNKLE 77 forum mates, from the UK, from Australia, from the USA… The beers were cool and good, the exhibition was amazing, well beyond my hopes.
But I’m still waiting for my guided tour.

James, what was wrong with it? You know that the people who pledged for the guided tour are mostly die-hard fans, who wanted to hear their hero (you!) telling some good stories about their passion. It was the only real interest of this reward, because the exhibition was free, and it stayed exclusive to us for no more than 2 hours.
Did you fear something?

Yes, as you can see there’s an S because there was supposed to be two different prints, in two different rewards. I must admit that, retrospectively, I’m quite happy I was not rich enough at the time, because I’d have pledged on 3 rewards : the guided tour, the £75-limited-to-300 print, and the £150-limited-to-200 print. In the end, there was only 1 print, limited to 200. What if I had paid £225 to get 2 copies of the same print? Did it happen to anyone?

This is probably the biggest issue of them all, since it concerns 359 angry people. This was supposed to be made of unreleased material from the Psyence Fiction recording sessions, whereas now it looks like no one did not even know what was available in the archives. Also, we have been confirmed that DJ Shadow has NEVER EVER been involved in this project. So the latest Kickstarter update was a total lie.
What’s up now? I don’t care if you meet some obstacles, shit happens and that’s OK, but please just LET US KNOW and I’m sure we’ll all understand.

The “complete set of the Mo’Wax back-catalogue on vinyl”

This is an issue for just one backer, but still a huge issue! The guy has spent £2000 for a bunch of records, and he recently confirmed me that 2 years later he still doesn’t have them. How come you did not find some time to pick up the records, put them in a few boxes, and give them to him? He’s in London, so you don’t even have to care about shipping!

In the past 2 years, you’ve have been involved in a lot of projects with Mo’ Wax and UNKLE. Let’s make a list :

Dear James Lavelle, you really need to realign your priorities, because you are clearly doing it wrong.

£38,916, that’s a lot of money. And I’m wondering : where the hell did it go?
Surely, printing a few low quality tees, posters, 2 color prints, and stickers, is not very expensive, is it?
The book maybe? It was not part of the Kickstarter, so I assume that Rizzoli has paid for the photo shoots and the excellent work of Ben Drury. Did they?
The exhibition was part of Meltdown, right? So, again, I assume that Southbank Centre or whoever organizes the festival has injected money in the exhibition. The free beers? Brewdog provided them as a sponsor.
I’m not saying that you’ve misused our money, I’m just asking : how did you use those £38,916 we gave you? And please don’t tell me Saatchi!

Do you have any idea of what crowdfunding is? It’s a trustful collaboration between you and the rest of the world. You don’t just ask people to open their wallets, you agree to give them what they’ve paid for.

I don’t want my money back. I want the full project to come to an end, and I’m still confident that it will. I want you to keep us all updated about what’s going on.
I know you are not an internet guy, you’ve never been close to your fans, and that’s OK. But you have some guys to do the promo for you, so tell them to stop posting on Facebook as if there is nothing amiss. This is not OK, and this lets people think that you are fooling them.
Please, be respectful to the people who supported you!

I’m not the kind of guy to take legal action, not even to report to Kickstarter, but, 2 years without an honest word, James! That’s enough.

Yours truly,
Ben aka Dale Cooper