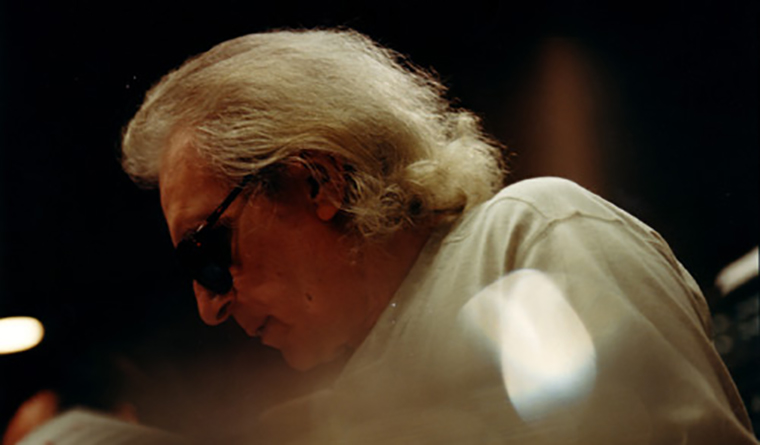 David Axelrod is not the usual kind of artist you’d expect to have a release on Mo’ Wax. After being a hero in the 60’s and 70’s, he sank into oblivion before his name surfaced again when some Hip-Hop producers started sampling his tracks, most notably Dre Dre on The Next Episode, or our very own DJ Shadow on Midnight In a Perfect World and more

In 1998 James Lavelle asked him to remix UNKLE’s Rabbit In Your Headlight. This collaboration led 3 years later to a new album, something quite unexpected really, with 7 forgotten tracks from an acetate cut in the 70’s, and 2 brand new works to open and close the album.

The enhanced CD contains exclusive David Axelrod interview footage, featuring James Lavelle, about the making of the album which I have uploaded on Youtube so you can watch it just now :

If you have a 35 more minutes to spend I highly recommend you to listen to this splendid album with the following Youtube playlist while you read DJ Shadow’s liner notes from the album booklet below.

Much has been written about the city of Los Angeles and the varied inhabitants that claim it as home. A recent article in one of the local weeklies unveiled a selection of the 25 people who, in spirit and in action, most personified the essence of that great metropolis. Consisting of a predictable mix of politicians and provocateurs, the list proposed how each individual exhibited, willingly or otherwise, an aspect of municipality unique to Southland life. I could think of no more glaring omission than to hove neglected David Axelrod.

“The Ax” is LA personified; fiercely proud, intensely loyal, brutally honest. Born and bred in a culturally rich and integrated working-class neighbourhood, young David learned how to scrap and hustle like a true Angelino. It was here, in the halls of Dorsey High, on the streets south of central, and in juke-joints of every reputation that his soul was infused with a code of honour that would guide David through six decades of music industry dedication.

Unshakeable in his vision, unfailing in his aim, unrepentant in his criticism, Axelrod navigated the treacherous seas of art and commerce with integrity end determination. Years of paying dues with tiny labels like Motif led to contacts with some of the biz’s finest and most respected stables: Warner Brothers, Fantasy, MCA, RCA, and of course Capitol, where he was at his most prolific. Surrounded by the cream of the LA session crop, including such luminaries as Carol Kaye, Earl Palmer, and Howard Roberts, Capitol’s studio B become the Ax’s personal bastion of sound.

David’s hallmark era at the label, which stretches from 1964-1970, is the stuff of music-journo legend. “There are the wild tales of studio debauchery, late-night bust-ups and blowouts, and of course, inevitable and passionate testimonials of David’s bona-fide genius. Contemporary scribes revel in extolling Axelrod’s relevance and vision; whether praising his innovative arrangements on solo works like 1968’s “Songs of Innocence” or recounting the eye-opening origins of sessions like the Electric Prunes’ “Holy are You,” writer after writer sums up the magical vagueness of the sound thusly: “Ahead of its time.”

It should come as no surprise, then, that the material on this album, as fresh as it sounds, was written over thirty years ago. Always the visionary, David had been toying with the concept of recording an album for Reprise based on Goethe’s Faust (he often used literary and political themes for inspiration). Interpretive lyrics were written by Steve Poncher, son of David’s long-time manager Lenny. Since each of the songs had already been written as lead sheets, Axelrod went into the studio and recorded the rhythm tacks. At the end of the session, an acetate was cut as a reference. Unfortunately, due to an intemal problem at Warners, the tacks remained shelved in anticipation of completion. As weeks turned to months, Lenny met with sympathetic Warner Brothers label head Mike Maitland to seek a resolution. Poncher successfully brokered an acquisition of the unused tracks. As time passed and careers rose and fell, the project remained unfinished and was all but forgotten.

Fast-forward to 1999. Renewed by hip-hop’s infatuation with his back catalog, David Axelrod is riding a new wave of popular interest. Hastily prepared compilations, an inevitable by-product of success, become strong sellers. Contact from James Lavelle leads to a highly praised remix for his label. The awareness of David’s revitalised notoriety begins to bubble up to industry veterans, among them, his old manager Lenny Poncher. In a passing conversation, Lenny mentions to Ax that he has found an old acetate of David’s, and would he be interested in hearing it. When it arrives, David is hard-pressed to remember much about it, and aside from being a pleasant enough encapsulation of time, he is more interested in continuing his new projects. So, the acetate sits some more…

It might still be languishing on the shelf today, had it not been for the efforts of David’s good friend Brian Cross, who upon learning of its existence insisted that Ax consider preparing it for release. Taken aback by Brian’s enthusiasm, David began to contemplate the possibilities, and out of loyalty and respect sent a taped copy to Lavelle for first consideration. James fairly jumped at the opportunity. It was not long before Ax was back in studio B with his old cohort, co producer H.B. Barnum, putting the finishing touches on a work that now spans five decades.

Nine songs have resulted from the venture, seven of them being the original acetate tracks with additional strings and texturing, and two completely new works. ‘The Little Children,” the opening cut and one of the newly created tunes, features an unlikely but immensely enjoyable collaboration with west coast M.C. Ras Kass. (Axelrod’s selection was not a random one; he had heard Ras’s rapping on tracks that producer Diamond had constructed based on samples of David’s records.) Ras, being from the same area as David, delivers a powerful oration that accentuates the defiance and tenacity of L.A.’s favourite son. The words flow naturally and unprovoked, the rapper riding his own delicate rhythm. Of the performance, David enthuses, “I can get a good take out of anyone I decide to use, but in Ras’s case I didn’t have to. He didn’t need cuing, he knew when to come in and when to lay out all on his own.”

The other new cue, “Loved Boy,” demonstratively illustrates not only the emotional facet of David’s muse, but the aforementioned loyalty he reserves for his friends. Legendary vocalist Lou Rawls was with Axelrod during his darkest hour, the day David has called “the worst of my life;” the day he received the call that his son Scott had died. “It had to be him, it had to be Lou on this track,” David whispered recently. “It just had to be.” Rawls’ harrowing performance conveys a knowing empathy suiting this most solemn declaration of remembrance.

Indeed, it is out of fond and thankful respect that David dedicates the majority of his other selections. Each song title is a tip of the hat to an individual David feels indebted to in some way, whether emotionally or professionally. As one of those individuals, and on behalf of all cf us, the honour and esteem is all ours.

Without explanation, the dedications might seem oblique, so here is a brief ward on them all. “Jimmy T’ stands for Jimmy Tolbert, “a very dear old friend” who helped Axelrod kick a debilitating drug habit. The president of Fantasy Records, Ralph Kaffei is the namesake for track four and “another dear old friend.” Since sampling has done much to reintroduce David’s vision, he feels it only appropriate to name check two of his favourite beat heads, “The Doctor & the Diamond,” as in east coast producer Diamond and celebrated pioneer Dr. Dre. Brian Cross, photographer to the stars and Axelrod’s personal valet, gets the name drop on “Big B+”. “For Land’s Sake” is a nod to one of the great tenor players, Harold Land. Lastly, “The Shadow Knows” goes out to this writer, who has been known to adopt an alias or two.

Can’t wait for the next one, David. Congratulations.

One thought on “David Axelrod : a focus on the splendid album for Mo’ Wax”