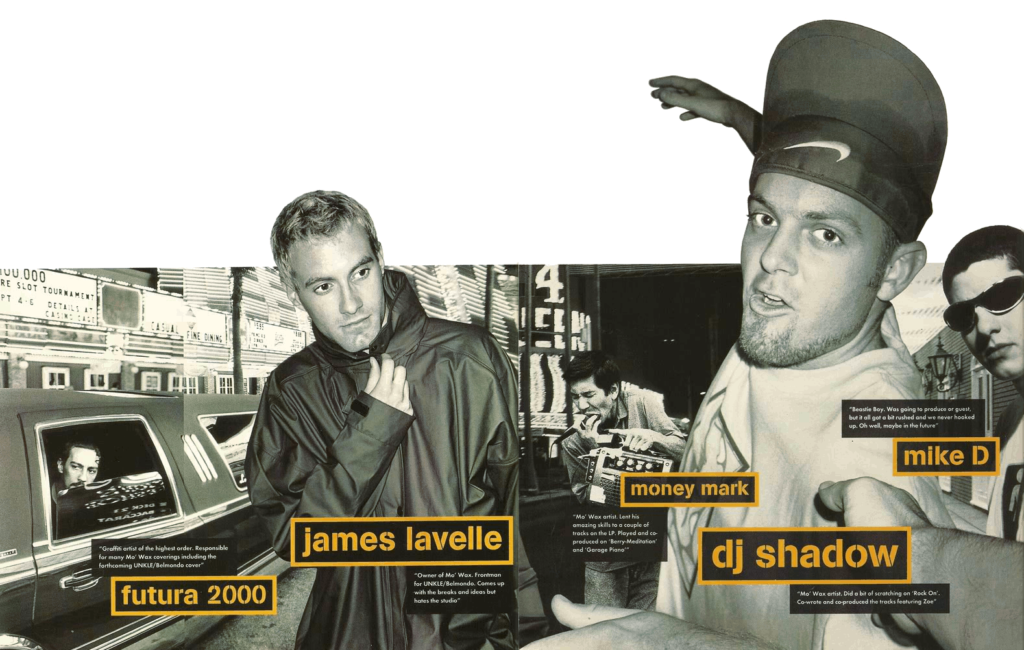 This is Spinal rap

Mo’ Wax are the trip hop label whose success comes from doing just what they want. In Los Angeles to record a major album the journey became a tripped-out odyssey of money, mushrooms and messed-up mayhem.

This is a story by Spooky and Futura. It features a man known by his second name, which is Kudo. Another man who, when he’s feeling up-up-and-away, is called Scott Free and, when he’s flown too close to the sun, is called Little Jimmy Porcelain. Another man who once styled himself Holygoof but might not any more. Together these three are the men front UNKLE and they are on Mission Implausible.
Loopz. That is the name of this story and an adequate description for the subversive sound that the men from UNKLE make. Some questions, though. Will their music be strong enough to liberate the people? Can the underground go overground? Will they get ripped off by their accountant? Maybe their mission isn’t that implausible after all?
The story is told by Spooky’s words and Futura’s pictures, and eventually, they will be rendered in loving detail on the sleeve of a Mo’ Wax album bearing the name UNKLE/Belmondo, the new extended name for the ensemble project. For now though, we are flying over the desert toward a city that was built by mobsters, turned into a palace of vice, and is now dominated by a shaft of light shooting vertically into the sky from the apex of a huge black pyramid.
We have come from Los Angeles on a day-trip to Las Vegas, real high-rollers, and everything is as brash and glorious as it should be. All that’s missing is the fear and loathing. Instead we have umpteen beers, two sixteenth-floor hotel suites, two Hawaiian shirts, too much money, and one magic mushroom between seven of us. This will prove to be mare than adequate compensation.

“This is just dumb though, isn’t it?” James Lavelle stares from the window of his room in the MGM Grand, the largest hotel, casino and theme park in the world. Underneath lie 33 acres of fun, including 171,000 square feet of gambling action. All around, las Vegas’ titanic casinos battle to outdo each other. A few hundred yards away the Luxor – the black pyramid – complements its space-strafing laser beam with a phalanx of sphinxes. Next door lurks Excalibur, a primary-coloured fairy castle that really digs that King Arthur dude.
Yep, it is dumb, but that’s Las Vegas and that’s why James “Holygoof” Lavelle has brought his UNKLE/Mo’ Wax posse here. To switch off and chill out. It is three years since the soundz-obsessed Lavelle started the London record label, spreading the word through his review column in Straight No Chaser jazz magazine and via his own eclectic, abstract sets as a DJ. Driven by rampant enthusiasm and youthful zeal, Lavelle has created an innovative, experimental artistic playground. A label that fuses and diffuses his love of hip hop, techno and jazz and brings together similar-minded musicians via club nights, multi-artist team and a shared spirit of open-minded creativity.
So, with Lavelle in America are his (old) school friend and fellow man from UNKLE Tim Goldsworthy, aka the sometime-overindulging Scott Free; New York graffiti artist Futura 2000, who along with New York’s DJ Spooky is creating the Loopz comic-strip for the sleeve of UNKLE’s debut album; and Max Burgos, manager of Money Mark and former manager of Mike D’s Grand Royal label. Holding the fort in Los Angeles while everyone else heads to Las Vegas is Masayuki Kudo, erstwhile member of seminal Japanese label/artist/production collective Major Force and the third man from UNKLE.
Soon we will be cruising the Strip in a white stretch “Lucky Seven” limousine, neon scudding over faces, sampling the cards, craps and poker wheels of trash city. After a few false starts – “How much is an ace worth?” asks Lavelle – we are gung-ho gamblers, thoroughly versed in the arcane exactitudes of the finger-wiggling required to communicate with the croupiers (no “stick” or “twist” here), au fait with the niceties of tipping the waitresses bringing you free beer, totally adept at losing money hand-over-fist. “It’s all gone horribly Peter Tong,” Lavelle groans as another pile of plastic chips vanish.
At midnight it is 94 degrees and the Nevada desert is a sea of cash-crazed humanity. “What time does this place close” wonders Lavelle innocently. We sit at a table. It is 1.30am. Gamble some more. Drink some more. Lose some money. A few minutes later it is 4.30. Time goes by. We miss our first flight back to LA, misplace Futura 2000, then miss the second flight. No matter. There’s gambling to be done. “How much have you lost?” Lavelle asks me. “$60,” I mumble, disconsolate. “You’ve got the ill street blues!” he gris.
Within 30 minutes he has won $140. I don’t like him any more. “I’m really into this!” chirps James Lavelle “Beats DJing any day.”

Mo’ Wax’s West Coast trip comes at a time when, as it approaches its third birthday, the “cult” label is poised on the cusp of… dare we call it The Big Time? Earlier this year the label signed a licensing deal with A&M records, lending it the support of a major, and the budget to decamp to Los Angeles for a month. Exactly halfway through this sojourn, Mo’ Wax will experience the thrill of its first top 40 record as Money Mark’s “Keyboard Repair”, the first album from Money Mark (the “fourth Beastie Boy” and Mo’ Wax’s most high-profile act to date), enters the UK chart at number 35.
Post-A&M deal, Lavelle and Mo’ Wax have been caught up in a rush of activity unusual even icon label as prolific as this (in three years it has released over 50 records). There is an album released this month from Japan’s DJ Krush; the forthcoming release of “Headz II”, a follow-up to last year’s “Headz” compilation, the label’s most successful release to date and the most persuasive testament to Mo’ Wax’s electric eclecticism; an offshoot label called Excursions, set up to release monthly one-off ventures into jungle, hip hop and techno. the signing of Detroit’s Carl Craig and his “Bug In The Bass Bin” track; and early work on another new signing, Andrea Parker, whose burning-blue soul comes backed by a 40-piece orchestra.
Small wonder that Lavelle needed to “get away from my environment, the madness of England, to do my own thing without everybody hassling me constantly”. For him the trip is also an opportunity to work with Money Mark, Mario Caldato Jr (the Beastie Boys’ producer) and Mike D – as an artist and label owner himself, the Diamond geezer is a bit of a hero to the young hip hop freak from Oxford.
“Whether or not we finish the UNKLE record here is not the point to me [they don’t; they will return with 15 tracks, leaving a further nine – featuring the likes of Plaid, Photek and Peter “Baby” Ford – to be completed in London],” he stresses. “The point is to see whether or not we can connect with the people that we’re around on another level.”
When Lavelle says this, he has in mind his long-standing friendship with Tim Goldsworthy. They have known each other since Goldsworthy was 12 and James was ten. In their teens they started their own club in Oxford, Mo’ Wax Please, and fiddled about making “dodgy techno” on Goldsworthy’s “little set-up” at home. Growing up with and loving exactly the same stew of hip hop, jazz and techno records, James and Tim can bounce ideas off each other in UNKLE, relying on Kudo’s prodigious studio skills to rope irate together.

This is the British music scene, mid-Nineties style. Young men in their early twenties, who have learned their musical props and business acumen in the thick of the country’s club culture and are now watching the multi-form music they pioneered send a ripple effect across the globe, turning their tiny label into an international phenomenon.
Naturally gravitating towards those of a similar mindset has always been James Lavelle’s strength. Soaked in hip hop lore, his love of graffiti led him to seek out Futura 2000 in New York after a chance encounter whilst Lavelle was DJing in Berlin. An obsession with Japan’s take on jazz and beats saw him fall in with Major Force and DJ Krush. Through the beats and Star Wars obsession and old school video games he and DJ Shadow both shared, he found more than a label/artist relationship. Equally, it was through a mutual friend, who imported Mike D’s X-Large label to London, that Lavelle, a skatewear fan, became acquainted with the Beastie Boy. Now, post-Tricky, post-Portishead, post-trip hop’s commercial explosion, Mo’ Wax and friends are the international club culture’s Camelot.
And so, as friends, the Mo’ Wax posse lie by the pool of their LA house and rip through Las Vegas. This might be Spinal Rap but it is also a very serious – if you will – trip-hopumentary.
“We’re one of the biggest independent labels,” says Lavelle. “Most people on that scene will sell 4,000 records, whereas well sell 10-12,000. Which means that I know we’ve gone beyond the trainspotting thing. There’s the real underground market, then there’s your market that us and Warp have got. Then you’ve got that market where people buy Björk and Massive Attack and Portishead. That’s the next market you’ve got to get into.”

Up in the Hollywood Hills, the serious business of kicking back goes on. DJ Shadow, in town from his home in California’s cowcountry, hasn’t quite got round to applying his razor-sharp scratching skills and encyclopaedic knowledge of beats to tape. He’s floating on a lilo in the pool, murmuring that “this is definitely ill”, which means he’s enjoying himself. Futura is “just sittin’ here, just getting inspired”, which means he’s doing a jumbo crossword. Singer Zoe Bedeaux is off visiting some friends. Ice-T’s manager calls for James but James is busy with his new lady friend who’s flown in for the weekend.
There will he a birthday party for Mike D’s wife Ione Skye at the Beastie Boys’ HQ over the hills in “the Valley”, starring Ad-Rock, Donovan Leitch, some other junkie-pallored model types, Amanda de Cadenet (who clearly arrived via a hedge, backwards), a stumpy girl with so much silicon that she has trouble standing up (but then she’s a pornstar so that probably makes the job a bit easier), a basketball court and some Jagermeister.
Then there will be a night in a heavy metal club where James will drink too much tequila and vomit on his shoes. An encounter with Traci Lords. An evening DJing on Santa Monica Boulevard.
Little known fact: like many people, when James canes it he gets paranoid. Paranoid that he smells. Tim and Mo’ Was graphix man Swifty have been known to stand behind him in a club and sniff loudly and accusingly.
Oh yeah. The music. Over the course of the week I hear a snatch of one tune one night at Mario’s house – a heavy, sinister, whiplash keyboard haze that Kudo, and TIm have been working on. But it’s just a snatch. After that it’s back to sipping beers on Mario’s deck, watching the stars, trying to hear the coyotes, James and Tim, old buddies, enthusing over Black Dog. Just hangin’.
“This is turning into the Waterworld of records,” Max Burgos sighs with a wry smile. But he, like no one else, really cares.

Mo’ Wax words on picture captions by Tim Goldsworthy.
Mo’ Wax release a single by UNKLE/Belmondo in January, with an album to follow in February. 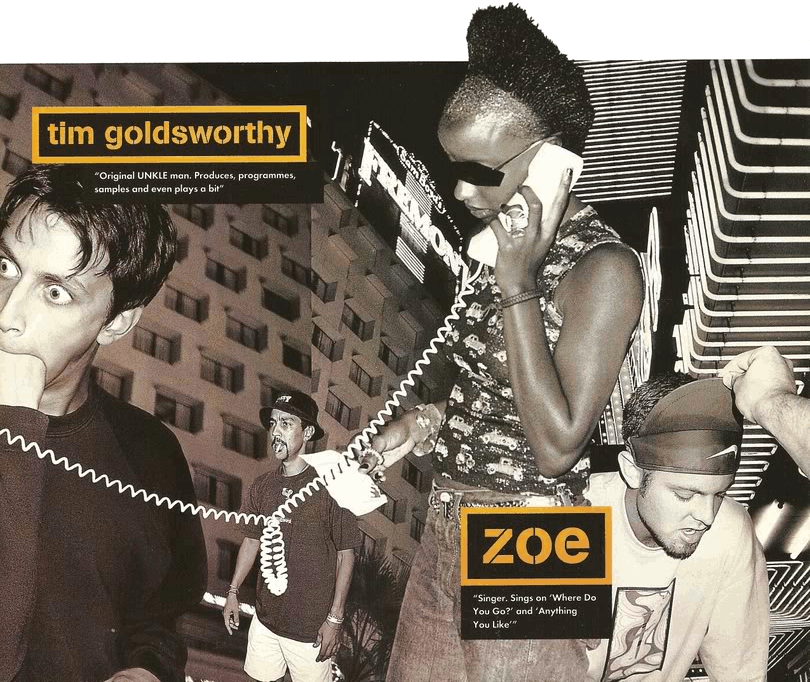