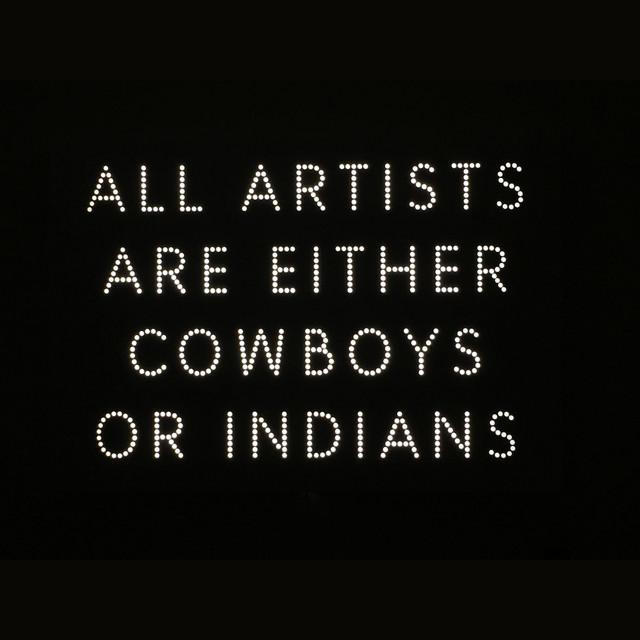 Cowboys or Indians is produced by Matthew Puffet, the new “main man” behind the latest UNKLE incarnation, and features Elliott Power, Mïnk and Ysée. Elliott Power need no introduction (but if you need it, just read this), Mïnk is the artist name of Dorian Lutz, Elliott’s partner in crime in the NuBrain crew and producer of most of his tunes, and as far as I know Ysée is Mana Haraguchi, a singer and producer from Paris.

The result is a very original song on a 7/8 beat, with a lot of influences from techno to rock, and the inevitable Massive Attack vibe provided by Elliott’s flow. The more I listen to it, the more I like it.

It’s worth mentioning that the Cowboys or Indians artwork and title come from an artwork seen at the 2010 Daydreaming with… James Lavelle exhibition.

Surprisingly, this is not released under the Marathon / Mo’ Wax flag, but on James Lavelle’s Songs For The Def record label. STFD has had only 2 releases so far : the one sided 7″ and 12″ dropped at the UNKLE gig at Meltdown 2014. Since then, Marathon boss Philippe Ascoli and James Lavelle teamed up again to resurrect Mo’ Wax so I was quite sure that the next UNKLE releases would have a Mo’ Wax style catalog number. Apparently I was wrong.

Anyway, it looks like a new era has finally begun for UNKLE, and it’s time for a new LP, the first one since the excellent Where Did The Night Fall back in 2010. It’s planned for 2017, so let’s hope this will give James some time to complete the Psyence Fiction reissue.