Watch the weird video of Money Mark’s most successful release on Mo’ Wax, that was released exactly 17 years ago today.

Money Mark’s Hand In Your Head was released on 16 February 1998, so this 17th anniversary is a good opportunity to re-upload this creepy video, after the shutdown of the Mo’ Wax Please Youtube account last year (for obvious copyright infringement reasons). Yes, the video was already available on Youtube but in very, very low quality, and distorted, so here it is, in full original quality (it’s from 1998 so expect no HD!).

Hand In Your Head is one of Money Mark’s most famous tracks and one of Mo’ Wax biggest successes : it reached #40 in the UK charts in February 1998. It’s one of the 3 tracks that made it to the UK Top 40, the 2 others are DJ Shadow’s High Noon, #22 in October 1997 (but I guess it was more for the Organ Donor version…) and UNKLE – Be There which reached #8 in 1999. By the way, I recently posted a full list of Mo’ Wax releases that made it to the UK charts.

Originally released as Got My Hand In Your Head on the ’95 album Mark’s Keyboard Repair, it has been re-recorded in a longer and probably more “market-friendly” version, featuring Sean Lennon on bass. This new version was first published in 1996 as the B-side of the 10″ promo for Cry (Dust Brothers remix) MW066DJ which at that time was more like a single from Mark’s Keyboard Repair. When the single came out 2 years later as MW066 (with a new promo MW006DJ2), the sides were flipped (with the addition of the excellent Stone Whirl) and Hand In Your Head became the main single for the album Push The Button. The single is also available as a CD and a cassette (note to self : I’m still missing this!) 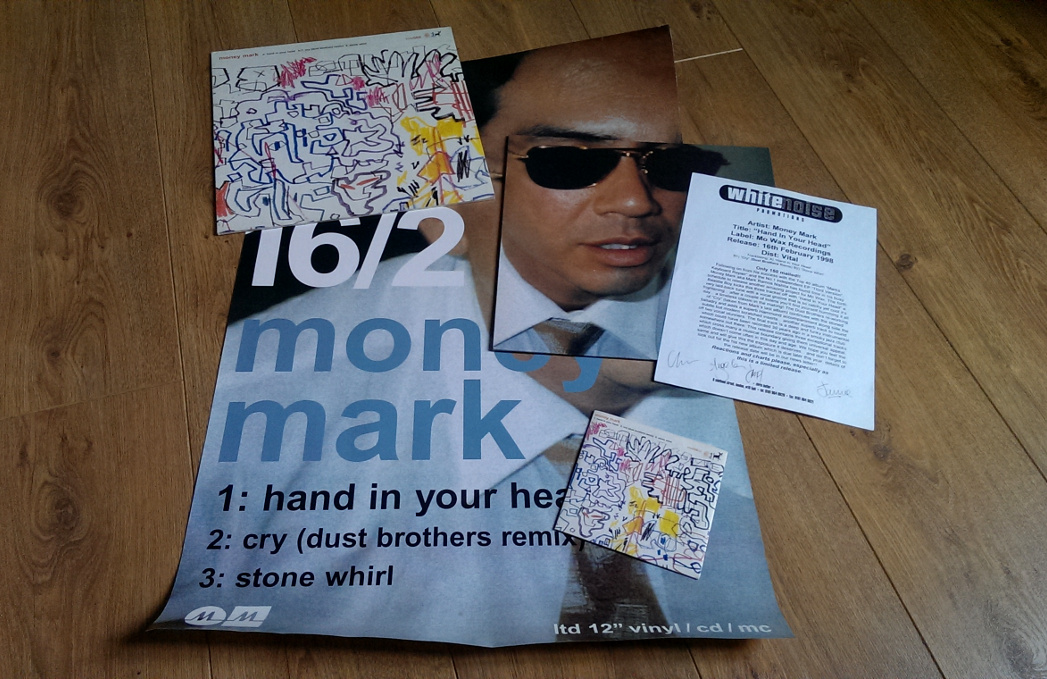 It’s worth mentioning that the video is also the introduction to one of the Mo’ Wax holy grails to come : the vinyl killer, a little VW van that can play records by driving in circles on them. The Mo’ Wax / Money Mark vinyl killer was released with a limited to 500 copies, blue promo record of Mark’s next single Maybe I’m Dead, and is one of the most chased after Mo’ Wax stuff. I’ve seen maybe only 2 of them for sale in my entire life, for crazy prices…